Diffraction, Reflections, and Resonances in Your Audio System

When designing a loudspeaker or audio system, it is important to take into account the effects of diffraction, reflections, and resonances. Doing so will positively impact the sound quality of your audio system.

Diffraction occurs when sound waves change direction, and unintentionally become a secondary sound source. Sharp, abrupt edges on a speaker cabinet, a speaker’s frame, and port hole openings can all cause diffraction to some extent.

Reflections occur when the sound waves from a speaker come into contact with a boundary, such as an adjacent wall, and reflect back towards the listening area or sound source, such as a speaker.

When a speaker makes sound, it can energize nearby panels and components from the vibration that occurs when a speaker moves or based on the resonant frequencies of the components or panels. This is often heard as buzzing or resonance coloration of the audio system sound. 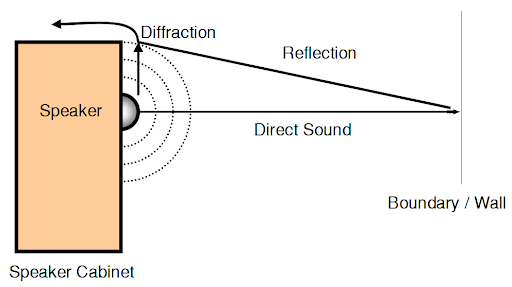 MISCO runs into this a lot when helping companies embed loudspeakers or audio systems into their products. In this blog post, we will discuss what impacts diffraction, reflections, and resonances, and how to handle it in your audio system.

First, it's important to understand a little math and physics about the relationships between sound wave frequencies, wavelengths, and baffles, the surface on which the speaker driver is mounted.

Frequency: Diffraction becomes more pronounced at higher frequencies because the wavelength is shorter. This means that high-frequency sounds, like those coming from a tweeter, are more likely to diffract.

Wavelength: If the distance from the source of sound to the edge of the baffle is half of the wavelength of a particular frequency when it diffracts, it will be 180° out of phase with the original wave and some cancellation will occur. This can cause a dip in the frequency response, at that particular frequency. This also happens if the distance from the speaker driver to the baffle edge is a wave and a half, two waves and a half, etc. away.

Baffle size: The size of the baffle also affects diffraction and reflections. If the baffle is large, a larger band of frequencies (with wavelengths equal to or less than the dimension of the baffle) will be more pronounced due to sound wave reflections; this is called baffle step response or baffle gain. Baffle step response is the increased output of higher-frequency sounds that are reflected forward and perceived as artificially amplified, compared to the low-frequency sounds (where the wave may be large enough to not bounce off the baffle).

To avoid these issues, it is important to consider the size and shape of your audio system's enclosure when designing it. Work with your manufacturer and discuss which frequencies the speakers will be handling most often and where the speaker will be deployed.

Specifically, edge diffraction is one of the most common problems that audio designers face and can help with. This is caused when sound waves reach the edge of a nearby surface, the pressure drops because the waves expand from half space to full space. This pressure difference creates another sound wave, which originates from the edge and moves in all directions. Since this new sound wave is not in phase with the original wave, it may create ripples in the frequency response and smear stereo imaging.

How to Deal With Diffraction, Reflections, and Resonances

To mitigate diffraction, it is best to ensure that there is a smooth, clear path from the speaker to the intended listener. Try to avoid abrupt sharp edges and placing speakers in such a way that there is a surface partially blocking audio output.

A study of several speaker enclosure shapes that was performed decades ago (but still holds true today) found these shapes returned these SPL variations due to edge diffraction and reflections/baffle step response (remember, the lower the better in terms of disruptions to the expected frequency response): 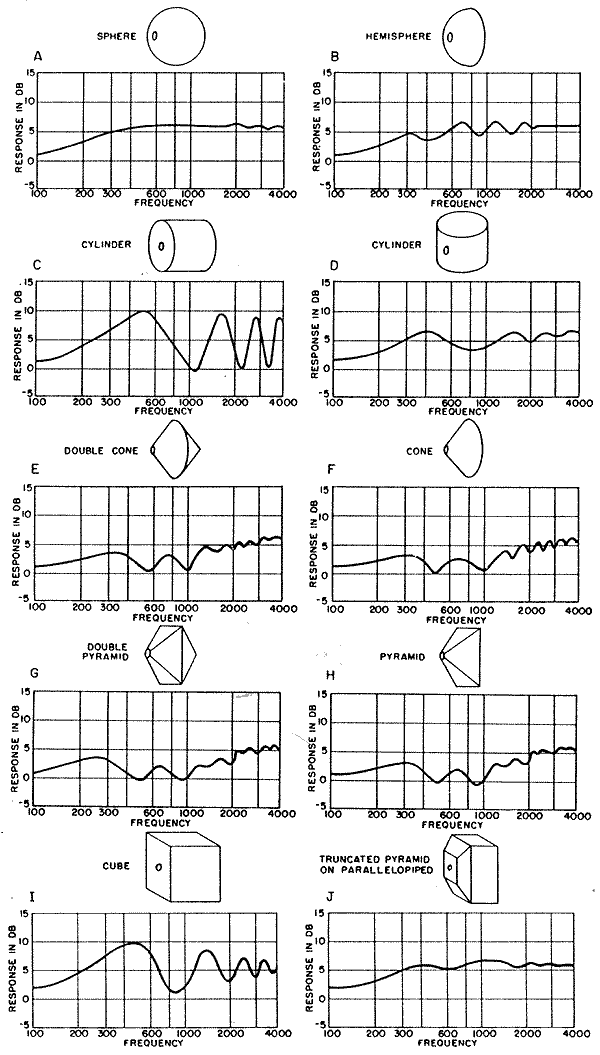 In a spherical speaker, the sound waves don't have a flat baffle to reflect off of so they travel around the sphere without interfering with each other much. Of course, creating a round enclosure for a speaker means you will have to deal with other acoustical design challenges.

Along with enclosure shape, the drivers' relative positions to the edge of the baffle will impact diffraction and baffle gain. Placing a speaker in the center of the baffle may be aesthetically appealing but it may also create more diffraction because the sound waves that radiate out will all reach the edges at the same time. This is not ideal. Also, there will be more gain applied to the band of frequencies that have a smaller wavelength than the baffle dimensions.

When considering the design of your speakers, if you can incorporate rounded edges on the baffle or a chamfer-style enclosure you can often cut down on the impact of diffraction.

Component resonances are usually easy to identify, troubleshoot, and treat. Once speakers are mounted to their final design location, identify component buzzing or panel resonance by simply playing frequency 20 Hz to 20 kHz sine wave sweeps through the speakers at the loudest level they will be used at. Components that buzz should be hot-glued in-place, or better secured by means of something like a cable tie.

Resonances created by placing speakers into a cavity (much like a horn-loading effect) can be tamed by adding open-cell foam (acoustic foam) around the surface adjacent to the speaker, or altogether eliminated by moving the speaker so that they aren’t so deep within the cavity.

MISCO incorporates precise testing of speaker drivers, enclosures, and, whenever possible, a prototype product in its intended environment to help companies verify that their speakers will perform the way they want them to. If you’d like to discuss this process with us, please reach out to our team or learn more about how to get great sound by downloading our guide below.

Tags: Diffraction
Back to Blog

An ongoing debate in audio circles is: Are bigger speakers always better? They are certainly easier...
Read More

“What was that?”“What'dya say?”
Read More